When sudden cardiac arrests happen, minutes count. There are almost 420,000 out-of-hospital cardiac arrests in the United States each year, according to the American Heart Association, and most of them are fatal.

The city of Reno, Nevada, and its main partner Flirtey, the core of one of the 10 UAS Integration Pilot Programs, want to do something to fight the leading cause of natural death in Reno (and the country). Specifically, they want to demonstrate to the Federal Aviation Administration that drones can be safely used to quickly deliver AEDs to people suffering cardiac arrest, as well as for safely delivering packages in general.

Flirtey has made its name by making high-profile deliveries. It made the first fully autonomous, FAA-approved drone delivery in the United States back in 2016 (after which the drone that made the flight was inducted into the Smithsonian’s National Air and Space Museum).

It made the first autonomous, FAA-blessed ship-to-shore delivery later that year, then made a store-to-home delivery, then partnered with Domino’s to deliver pizzas via drone in New Zealand.

In October 2017, it announced a partnership to launch a drone delivery service specifically for AEDs, which is what its hometown of Reno is really interested in.

“The primary idea which interested the city of Reno to partner with Flirtey is the concept of using the drones to deliver AEDs and being able to test that as part of the IPP program,” says Scott Gilles, the city’s liaison to the IPP program. “That’s what we’re primarily concerned about.”

Flirtey has worked with the FAA for years, and when the IPP project was announced, brought it to the attention of Reno. The city saw it as a chance to help explore the regulatory and outreach roles for city government — to have a seat at the table when future regulations are hashed out.

“We hope we’ll be involved in the rulemaking process that the FAA will take at the end of this program, and the local government will be respected,” he said.

Reno will handle the community outreach and so will be able to gauge the tolerance its residents have for drones flying around, even if they’re doing good, which would also help it contribute to privacy issues in the future.

Flirtey completed the first flights in the program on Sept. 12, flying multiple drones simultaneously and simulating the delivery of AEDs in the presence of the FAA. The FAA granted a waiver to allow one operator to fly multiple drones.

“Flirtey just demonstrated deliveries with multiple drones per pilot for the first time, which is a major milestone toward scaling drone delivery nationwide,” Flirtey founder and CEO Matthew Sweeny said at the time. “We’re excited to be working with our partners and the FAA to save lives and improve lifestyles with Flirtey’s drone delivery.”

Reno is located in the Truckee Meadows region, next door to Sparks and near the California border. The city has a population of about 250,000, with another 200,000 in Sparks and Washoe County.

Partners for the effort include the Regional Emergency Medical Services Authority (REMSA), the Carson City Fire Department, the City of Sparks and Sparks Fire Department, Northern Nevada Medical Center, among several others, including unmanned systems-related companies AirMap and Iris Automation. 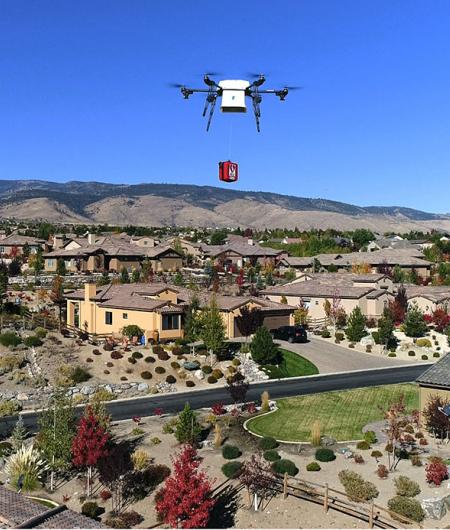 REMSA is the ambulance service provider for the region and would take the call to determine what sort of emergency was under way, whether a gunshot wound or a cardiac arrest or something else.

“So it’s really REMSA who would pull that trigger to tell Flirtey we have an appropriate situation for a drone to deliver an AED,” Gilles says. “The determinations would be based on location, where the drones are situated. Can we use a drone to get the AED to someone on the ground faster than REMSA or the fire department, who are called out as well?”

The local fire department will always be called out as well, he says.

“It’s never going to offset the current process of the ambulance provider or the fire department, they’re always going to go no, matter what.”

The drones are “supplemental,” and will be evaluated to see if they can provide the AED faster, “which is part of what remains to be seen from this experiment,” he says. “In this region, the Truckee Meadows region, Reno and Sparks, our fire departments and ambulance services have really good response times. The drone would have to be very efficient to get there first.”

The ultimate goal — aside from helping Flirtey further establish the concept of drone package delivery — is to save lives, and lots of them. Deploying AEDs via drones would increase the cardiac arrest survival rate of Washoe County residents from 10 percent today to about 47 percent, the city of Reno has calculated.

Above: A Flirtey drone makes a mock delivery. Photo: Flirtey.