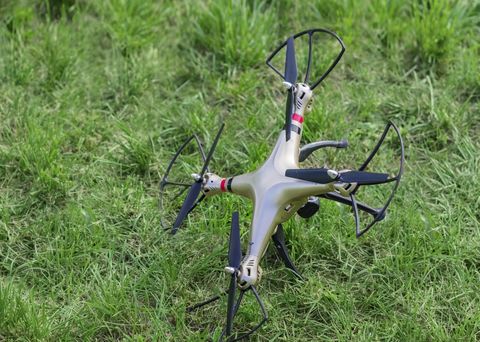 As I watched the guy unpack his Phantom 4 drone in the middle of a gorgeous valley in Mongolia, I thought: I came out here to get away from people like this. Here we were, far from LTE reception, watching wild horses run. Beautiful stuff. Then the dude’s propellers start their power-tool whine as his drone whips around the sky, all so he could pretend to be David Attenborough for his Instagram followers.

I’m saying, I kind of get why the Federal Aviation Administration and Congress are changing the rules for drone operation. The literature is a mess of initialisms (FAA, AMA, DHS) and legislation (Bill S.2836, Section 336, Part 107), but the proposals come down to restricting where people can fly drones, and how much government approval pilots will have to earn in order to fly legally. A few days before I wrote this, the president signed the FAA Reauthorization Act of 2018. Among the regulations that come with it is legal permission for government employees to surveil and destroy drones that fly into sensitive airspace. Besides stopping a terrorist attack, the idea is to prevent incidents like when an amateur pilot flew his Phantom 4 into a Black Hawk Army helicopter late last year. The Act also repeals the aforementioned Section 336, which, in many words, restricted the FAA from regulating recreational drones apart from a few reasonable rules to keep hobbyists out of trouble.

That repeal opens regulation to an idea that’s unpopular with drone pilots: make anyone who wants to fly any drone obtain a Part 107 certification, similar to a driver’s license: You pay $150 and take a written test. All professional drone pilots need one. The concern is that this might discourage students who want to use drones for a science project, or a contractor who wants to use a drone for home inspections. And if people are afraid to mess around in their backyard with a cheap Parrot Mambo mini drone, they might never get hooked, get their 107 certification, and go on to become the next great cinematographer.

A more reasonable idea is to develop remote identification—essentially, as-needed surveillance. Last year, DJI started selling a device called AeroScope to police, sports stadiums, airport administrators—anywhere with concerns about UAVs. It’s a cooler-size box with a monitor and antennas that can pull information on any DJI drone within a few-mile radius. It tells the operator the registered owner, the trajectory, and, most importantly, the location of the operator. Rather than knocking a drone out of the sky, potentially hurting people below, law enforcement can find the operator and reprimand him or her accordingly. I don’t like adding more avenues for authorities to find unnecessary intelligence about the public, but if giving up the same information airplane pilots give to control towers means responsible drone pilots can fly without fear of an expensive citation, it’s worth it.

People at DJI, like many drone enthusiasts I know, say that the majority of pilots want to use their devices without bothering anyone or breaking the law. The fact that some companies sell anti-drone weapons might contradict that, but I mostly believe it. And most pilots I know follow the basics—fly below 400 feet, avoid airports and crowds, don’t fly at night, and keep the drone in sight. (New pilots who don’t know those rules will learn them when they need to pass a test that DJI added to the app required to fly its drones.)

There are still people who fly drones into Army helicopters, or get drunk and land them on the White House lawn. We need ways to deal with jerks. But we also need to calm down. I was annoyed by that guy in Mongolia, but I know that drone proliferation is a net good. With them, rescue workers can quickly find survivors after a disaster. Potential home buyers can get a view of the property they never could before. And a 14-year-old kid with a great idea and a little practice can make a heck of a science project.