A drone, made by CyPhy Works, stands over the UPS package it carried to Children’s Island off the coast of Beverly, Massachusetts. 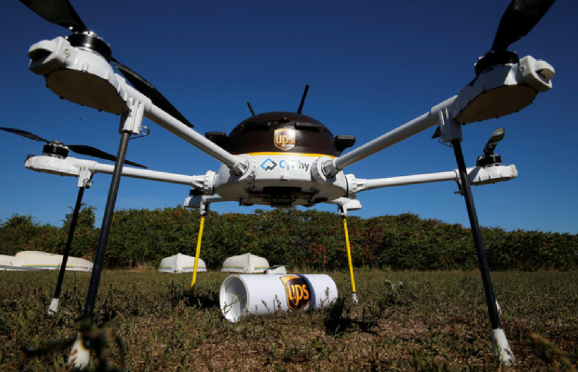 A drone, made by CyPhy Works, stands over the UPS package it carried to Children’s Island off the coast of Beverly, Massachusetts.

UPS is doubling down on a drone logistics and delivery market that’s anticipated to be worth $29.06 billion by 2027. Ahead of the company’s quarterly earnings call this evening, it revealed that it has applied to the U.S. Federal Aviation Administration for Part 135 certification, which would enable it to orchestrate commercial drone flights under a newly formed subsidiary business called UPS Flight Forward.

Part 135 approval, which could come as early as this year, would allow Flight Forward to apply for FAA-certified flight operations beyond line of sight, at night, and without limit to the number of drones or operators in command. That’s because Flight Fordware would be legally designated as a certified air carrier, affording it far more leeway in fleet management than the FAA Part 107 drone rules under which UPS currently operates.

Alphabet X lab graduate Wing took a similar regulatory path to market. It announced in April that it had been certified by the U.S. Federal Aviation Administration as a small-sized air carrier under Part 135 rules, giving it the green light to charge for service and paving the way for pilot programs in the Virginia towns of Blacksburg and Christiansburg,

UPS chief transformation and strategy officer Scott Price claims that Part 135 certification would not only enable faster scaling of the company’s drone deployments in targeted markets, but that it would lay the groundwork for one of the first fully certified revenue-generating operations in the U.S. UPS estimates that cutting off just one mile for the routes of each of the company’s 66,000 delivery drivers would amount to $50 million in savings.

“UPS is committed to using technology to transform the way we do business,” added Price. “UPS’ formation of a drone delivery company and application to begin regular operations under this level of certification is historic for UPS and for the drone and logistics industries overall.”

It’s yet another step toward drone delivery dominance for UPS, which earlier this year collaborated with drone platform provider Matternet to launch an aerial delivery service from WakeMed’s flagship hospital and campus in Raleigh. In 2016, it teamed up with Zipline and international health care alliance Gavi in 2016 to deliver blood products to remote locations in Rwanda. And in early 2017, it tested a drone that launches from the top of a UPS van to autonomously drop off packages as the delivery driver makes a separate delivery.

UPS is forging ahead against rivals like Amazon, which launched a trial of its Prime Air drone delivery service for select customers in Cambridge, England in December 2016. In the intervening years, companies like Microsoft and startup Flytrex have trialed airborne delivery services in cities like Holly Springs, North Carolina and Wichita, Kansas. In May, Uber announced plans to deliver food by drone in San Diego, and FedEx plans to develop a drone-powered aircraft inspection program in Tennessee.

Reports show the commercial drone industry is continuing to grow quickly, albeit from a small base. A 2017 forecast from Gartner projected the number of commercial drones sold that year would exceed 174,000. Moreover, about $454 million was thrown at UAV startups in 2016 alone, and the market is forecast to be worth $127 billion by 2020.