The U.S. Department of Defense will roll out a “trusted capital” program this fall aimed at bolstering the domestic industrial base for small unmanned aircraft, said Ellen Lord, undersecretary of defense for acquisition and sustainment.

Lord, kicking off the first day of AUVSI Unmanned Systems Defense. Protection. Security in Washington, saying, “we are not innovating on the business side of things as quickly as technology is being innovated and applied to warfighter missions.”

One effort afoot is to strengthen the defense industrial base in areas including rare earths and small UAS, both areas where “China has flooded our market, to the point where we do not have a resilient and secure industrial base. What has this done for us? It’s allowed us to get presidential determinations signed out that allow us to spend money in these areas to strengthen the supply base,” she said.

The DOD can intervene when a foreign entity wants to acquire a U.S. company that has critical technology related to national defense, “but that’s playing defense, and that only gets you so far,” she said.

In late October or early November, the department is rolling out a trusted capital marketplace project whose objective is “to get secure sources of capital together with typically small, innovative companies that have technology and early stage products in the sectors we identify … and bring the two together to try to get investment in the areas that the Department of Defense thinks it’s critical,” she said.

It won’t be corporate matchmaking on a one-to-one basis, but rather would bring a number of companies that meet DOD needs criteria together with vetted sources of capital “and allow them to create their own ecosystem and begin to invest in one another.”

It will focus on small UAS, “where we have a deficit of capability but a lot of technology.” It will build on work done by the Army, and “we want to make sure that we brand certify companies, large groups of companies, as those the Department of Defense is interested in and would like to see mature their products.”

Helen Greiner, a cofounder of iRobot and now HQE robotics, autonomous systems and AI for the assistant secretary of the Army for acquisition, logistics and technology, said Army robotics are increasing, with actual programs of record in place of rapidly deployed, off-the-shelf systems being hustled into the field with little integration, and spending charts “going up and to the right.”

Going forward, she said the military should be honest about robotic capabilities. They won’t be as autonomous as a human soldier, they won’t have any common sense and the more complex they are, the less reliable they will be.

“It’s important to get that out there because it’s going to come back and bite us later on if we’re not up front with the user community about some of the deficits,” she said.

With that said, the robots will bring great benefits, including allowing greater standoff distances, access to otherwise inaccessible places and increasing the speed of operation.

“I think we need to think more in terms of generations of products,” she said. “People are starting to think that way in software, but it’s for hardware, too, when you’re in a rapidly moving field.”

She outlined multiple ways for companies to “participate, and when I say participate, I mean, get funded,” including bidding on programs of record, joining industry consortia, working with the Rapid Equipping Force, bidding on DARPA programs, and others.

It focuses on what the Corps needs to persist in the Pacific, where “there are 27,000 Marines west of the international dateline at any given time.”

The USMC is looking for “numerous and inexpensive programs instead of the exquisite,” he said. “We’re really looking for smaller, more affordable systems” that can be operated by young Marines and can be used for reconnaissance, radio relay, even lethal payloads. 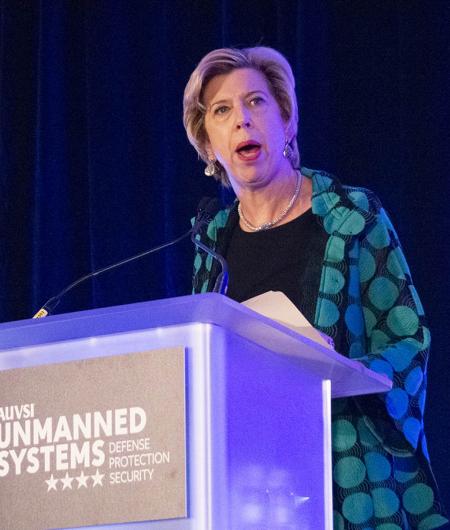 Smith said he’d be willing to get rid of legacy systems and the people who operate them in favor of new technologies that help the Marine mission.

Blue Vigil, a company that makes tethered power systems for drones, took home the top prize in the second annual Innovation Challenge, a package worth $35,000.

“We solved the problem of limited flight duration,” company CEO Todd Stave said in his pitch to the judges.

The company is four years old and has only one competitor, a French company that Stave said offers much more expensive systems. Blue Vigil has a price point of around $7,000.

Stave said the power system has a variety of uses, and noted that Indianapolis police used it to power a DJI Matrice drone at the Indianapolis 500 race.